No roof? No problem. Since becoming AD at Kent City High School after a storm deposited a sizeable portion of the gym roof in front of the school entrance, Jason Vogel’s created a powerful wind of his own, building one of our strongest athletic communities by connecting his English and journalism background with a love of sports and school history.

as told to Romy Glazer 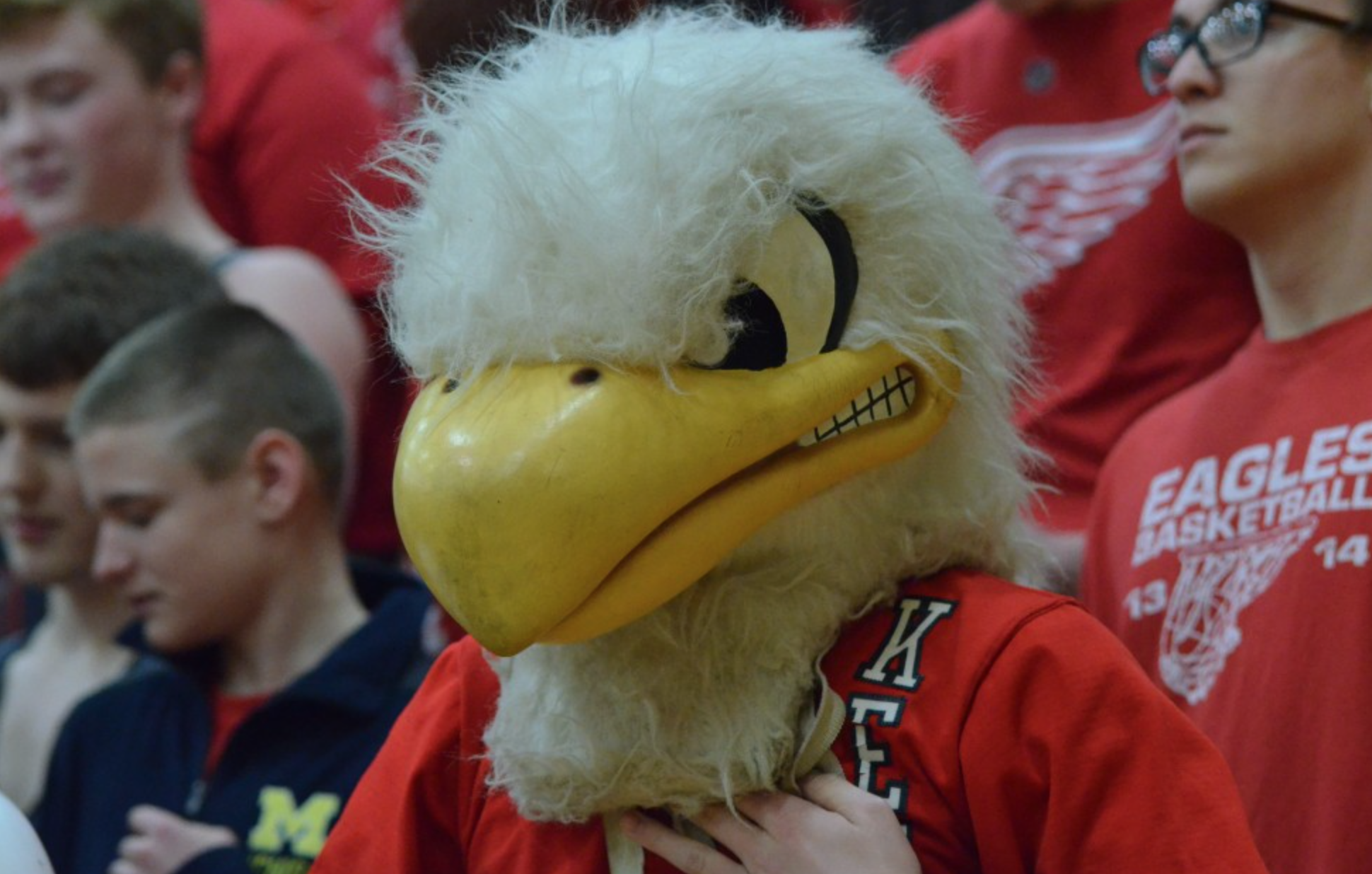 Of all the bus routes our 360 students take to get to Kent City High School, only two of them aren’t on gravel roads. If you can’t picture it – think of a big apple orchard; lots of our families are in the apple farming business, about 20 miles north of Grand Rapids, Michigan. That’s Eagle Country — we’re a small rural farming community.

I’ve been here four years so far, starting out as the Dean of Students in both the Middle School and High School back in 2012. I was promoted to Assistant Principal in 2013. And in 2014, after Spring Break, I took over as athletic director. It’s a funny story. At the time, I was on vacation with my family at Disney enjoying the sun when a big storm came through back at home. It was so strong, it blew the roof off the gym! A day or two later, the current athletic director resigned, and I came back from vacation as the new athletic director of a gym without a roof. 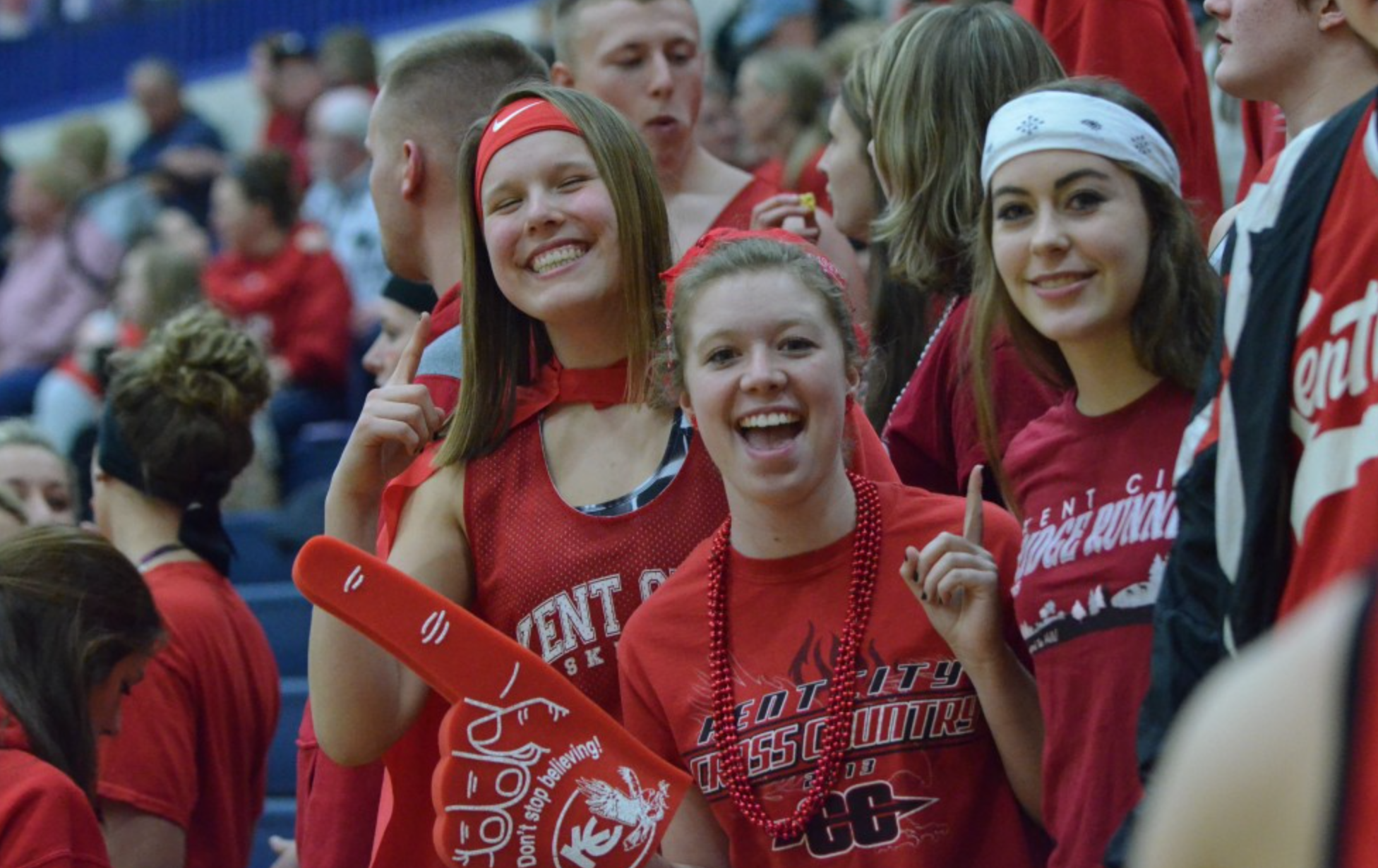 We started working with VNN back in 2013, when I was the assistant principal. Before then, we had a link to schedules on our school website, but that was about it save for a Weebly site I set up for the football team when I was head coach. The old AD had a good idea of where things were going, but our VNN site never quite took off until that following Fall when I took over and we got all the coaches in a room to talk about it. My background is in writing, and taught English for ten years, so I knew the power of journalism and coverage to rally people around a common cause. The coaches on the other hand, didn’t see it straight away. But I needed their help and made game recaps mandatory. The funny thing is, they weren’t dragging their feet because of the extra work — they just didn’t want to post when they lost! As a guy who coached before, I knew that even an article about losing was good because it would not just motivate the team to win more, but was a good way to force my coaches to review the games, keep people accountable, and think about their future strategy win or lose. At the end of the day though, what coach doesn’t want to promote their programs? That was what this was all about – if you weren’t into coaching to be a champion for your student-athletes, you probably don’t want to be a coach for us.

I had to keep on them at first. After 24-hours, if I didn’t see an article about last night’s game, I’d write them a note. Honestly, to me, the only thing more frustrating than not having a website is having a one that is not kept up-to-date, so having that constant flow of information is important. Your community needs to know what’s going on and that they can count on you for information. And they’re the real readers of our site— I’ve found that more often than not, it isn’t the kids. Sure they appreciate it, seeing their names and photos pop-up, and getting the motivation to do better because they’re being featured, but our main audience is those that support them – the parents and alumni. They’re the ones driving 30,000 hits in a month for us. 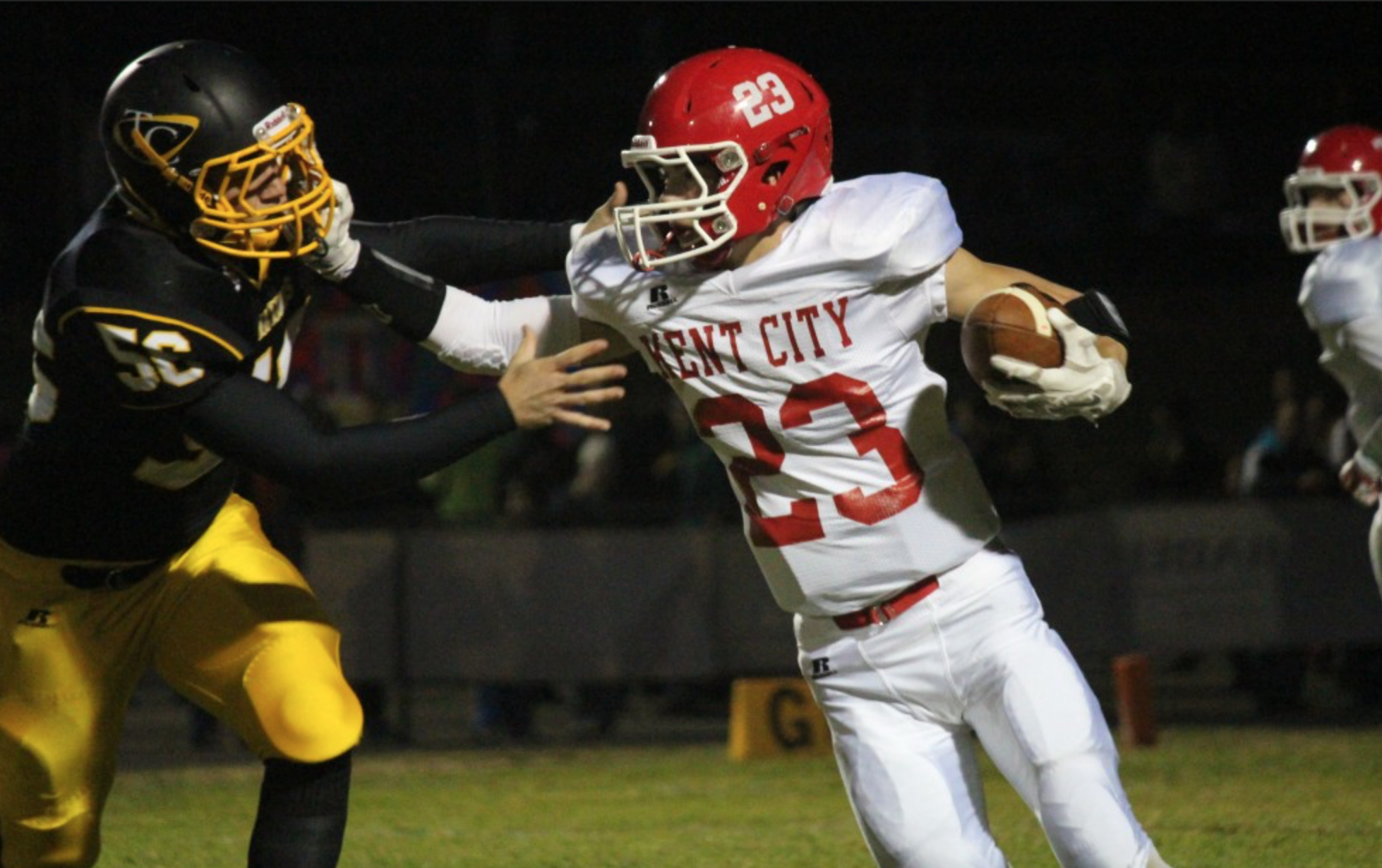 The impact of our site on the community started hitting me this Winter, when I began to notice the attendance at our basketball games growing. It’s always been pretty steady – I’d consider basketball to be one of our most popular sports, but this year, I was looking around, and saw more community members there who didn’t actually have an athlete on the team. Now that people have a storyline behind the games, they get more excited to see what happens. They’re truly invested – and that’s great. It’s also had an impact on our student section — our wrestling team has won the District Championship five years in a row, and we announced that if they went undefeated at the season opener versus Big Rapids and Kenowa Hills High Schools, Coach Kik would dance the Cupid Shuffle with the students. He was a great sport — and of course, when it happened, we posted the video online. He’s still got the moves – and the student section kept showing up, even having a holiday sweater party in the stands later on in the season. Another great example of getting the students out was Varsity Volleyball’s CSAA clinching victory over Morley Stanwood High School in late October. The last time we had won a conference title in volleyball, the majority of the current team was just learning to walk — it was packed! In the future, I’d like to make our technology platform more of a learning experience. We’re looking into how we could best involve students into being guest content creators. Their point of view is what we’re missing right now, and it would help and take what we already have to the next level.

Our state’s sports governing association, the MHSAA, are big Eagle fans too. This Winter, Katelyn Geers from our Girls Basketball team made the game winning shot versus Muskegon. After that game, and in part, our coverage of it, the MHSAA made Katelyn their inaugural featured athlete of the week – interviewing her, us, and putting a cherry on top of a great senior season. What’s more, that wasn’t the only game-winning shot she made this year. The other was against Shelby High School in the Regional Semi-Finals and it’s something that people here will remember for a long time. 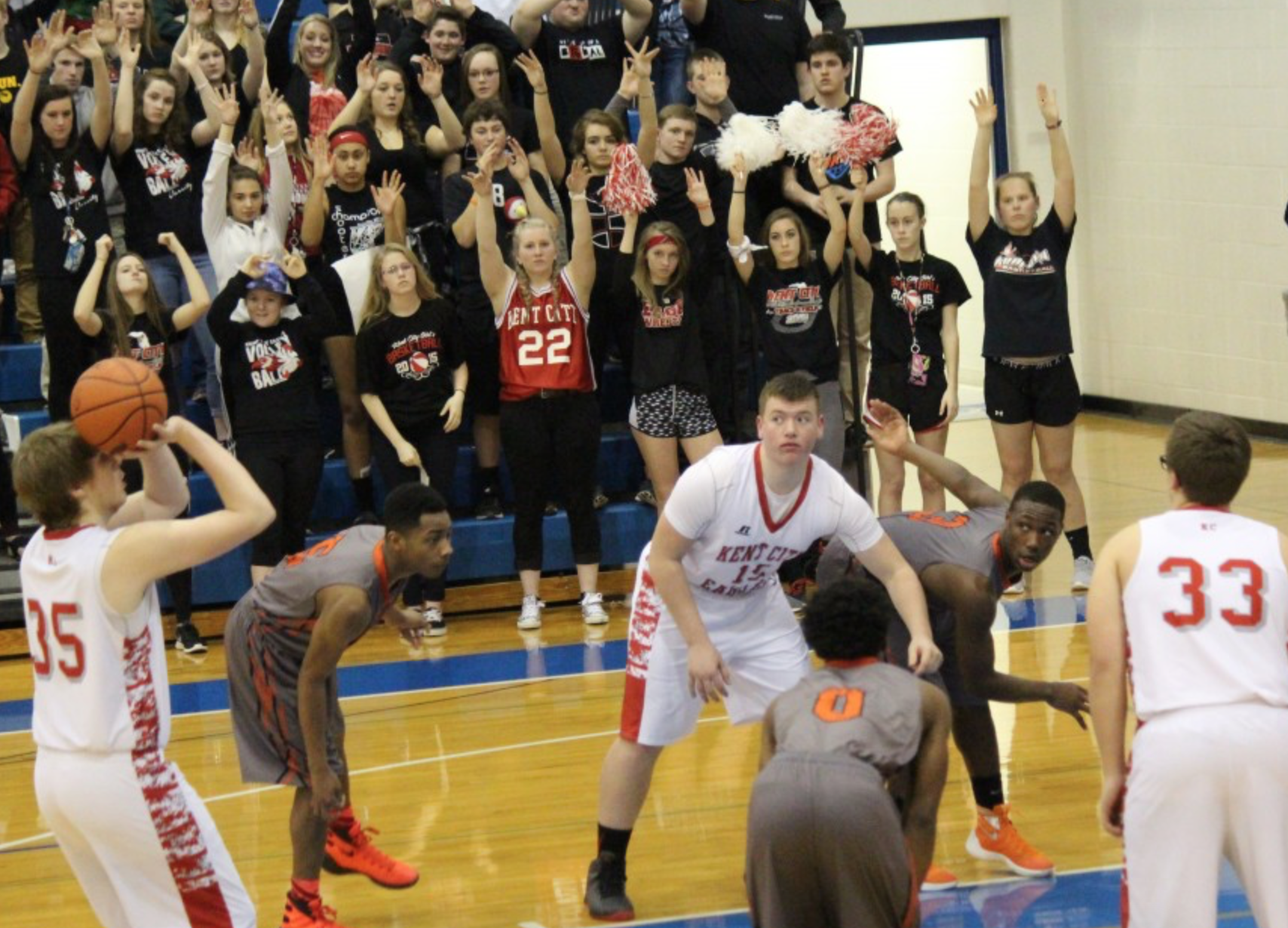 I think the thing I didn’t expect was just how interested everyone else outside of our community would be about us. Last year, we left our conference, the Ottawa-Kent Conference, and with it, coverage of the region’s major newspaper, the Grand Rapids Press. It kept me up at night for a while — but even after moving to our new home, the Central State Activities Association, the excitement in the media hasn’t slowed. I think we might be actually getting more coverage in our new local paper, the Muskegon Chronicle, than we ever did before – I’ll always link our articles to writers and tell them if there’s anything you want, pictures, dates, names, use them. There have been times where they’ve lifted right from our site! It’s great for our kids. We want them in the newspaper and want to get them as much exposure as we can.

MLive, (owner of eight newspapers in Michigan) called me the other week and asked, “what are you guys doing up there?” They have these game of the week, best place to see a game, best school quizzes occasionally on their website, and the guy was joking about how upset he was that we always win them. The secret is, we share them like mad around here. We don’t have a ton of people, and we’re up against all these Class A schools with four-five times our enrollment, but our website, text messages, and social media drives all that voting. We’ve built a good community up here – and it’s been because of technology that we’ve been able to reach them all. Each day I am able to congratulate student-athletes in grades 6-12 for games or performances that I may or may not have seen the night before, I can help increase interest in contests that would have been lost and or forgotten in the past, I can make sure our entire community knows everything that is happening in our athletic program, and I can help shine a spotlight on sports that don’t always get the attention they deserve. 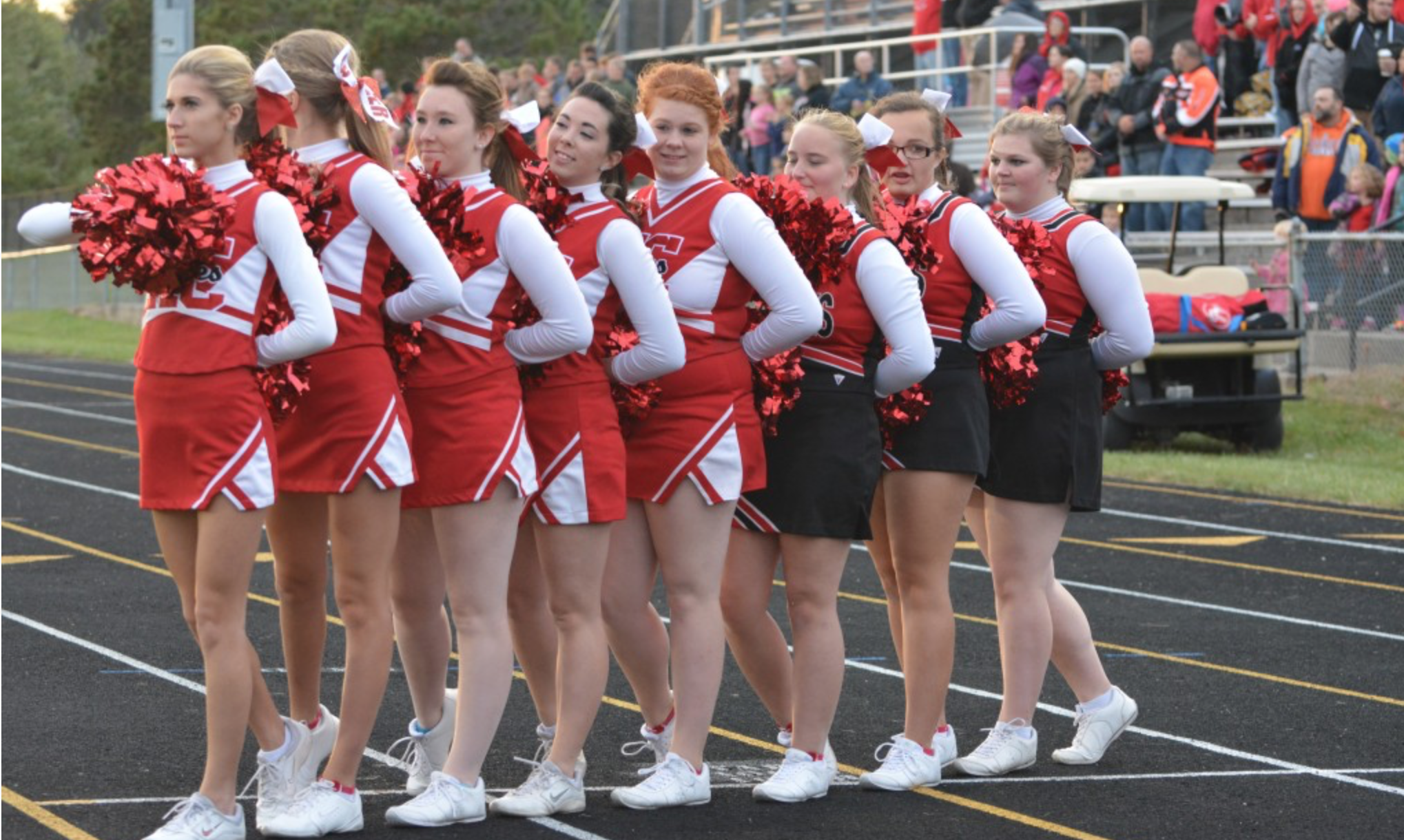 Want to learn more about the Eagles of Kent City? Check out their website at kentcityathletics.com or follow them on Facebook and Twitter. Interested in taking your high school sports community to the next level like Jason? Learn about all the athletic department communication tools we offer at VNN by scheduling a free demo with us at varsitynewsnetwork.com/schedule-demo