Every coach knows the importance of a good fundraiser. It can ensure your team gets to play in the latest tournament, or practice with up-to-date equipment.

While traditional fundraisers like bake sales and car washes have served schools well for years, they can also be time-consuming and inconvenient. Online fundraising is a cost-effective, easy alternative that allows athletes to reach more supporters.

In fact, several VNN schools raised thousands of dollars this past month using RallyAroundUs, a digital fundraising platform for athletics. The process is simple. Teams create a video explaining why they’re seeking donations and send it directly to their friends and family. The video is shared automatically to the team’s athletics website, and can be synced to its social media accounts. Fans can then donate online or pass along the video to other supporters.

Through RallyAroundUs, the top five teams raised a combined $34,731 in August:

The Centennial Hawks posted a team video, two articles and Q&A about their fundraiser to encourage donations. A late donation in September helped them land their goal of $10,000 – before their season even began. According to the team’s donation page, these funds will help them buy new practice jerseys and workout equipment.

As some teams wrap up their fundraising efforts, others have just begun. Many VNN schools launched fundraising campaigns in September. In just over a week, a few teams are standing out:

Interested in learning more about fundraising for your team? Schedule a demo with RallyAroundUs here. 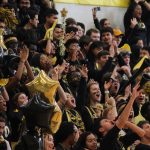 Who is the most impactful high school athletic department in the nation? The 2020 VNN National Championship is coming.National