Last fall, the KingCo League in Washington welcomed seven new schools into its athletic conference. It was the first major change the conference had experienced in 20 years.

Yonni Mills, athletic director at Bothell High School, was excited for the addition to the conference. The new teams, which upped the league from 17 to 24 schools, brought both ethnic and economic diversity. It also gave the league more schools at the 2A level. But along with the positives, she expected there to be some turbulence, too.

“Sportsmanship is always something that we’ve struggled with and adding new schools presented a lot of new challenges because the kids didn’t know each other,” Mills said.

Emily Zimmerman, athletic director at Evergreen High School, echoed both Mill’s excitement and concerns. With COVID-19 pausing sports, she wanted to find a way for student-athletes to still connect off the field.

“Coming into a league as a new AD with new students who couldn’t build relationships through sports, my thought was to build the relationships before we play,” Zimmerman said. “Knowing we weren’t going to be doing sports all fall, it became important to me and other ADs to create an advisory group.”

The start of KSALT

The league launched the group, called the KingCo Student Athlete Leadership Team (KSALT), in October. KSALT consists of 24 athletic directors and two student-athletes from each school, selected by ADs for their positive leadership skills. Along with building relationships and leadership skills, the group allows student-athletes to share feedback and input on conference decisions.

“We are laying the foundation, developing trust, building leadership skills and starting to involve student voice in the decisions that are made for the KC League,” Zimmerman said.

The group meets virtually every month. Each meeting starts with introductions and ice breakers, then the athletes dive into break-out sessions. The ADs encourage students to lead the conversations, which range in topic from school colors to sportsmanship.

“We’ve talked a lot about COVID and how the kids feel about all the Zoom meetings. We’ve also talked a lot about leadership,” Zimmerman said. “They’ve done a lot of sharing to get to know each other and learn about the different schools.”

A place for important conversations

The students have also discussed more serious topics such as mental health, race and inclusion. These conversations help athletes get in front of their differences before ever stepping foot on the court, Zimmerman said. Students have really stepped up for these discussions, she added, and clearly see the value in having them. On top of having key conversations, the group has actionable plans, too.

“A sportsmanship statement exists in our league that we would like them to edit and revise so it’s student driven,” Mills said.

KSALT would also like to start inviting guest speakers to their meetings. And as the group moves forward, they eventually want to host meetings in person. Although the pandemic highlighted the need for KSALT, there are no plans to dissolve the group once the pandemic ends.

“This group has been so valuable, I can’t even imagine how powerful it’ll be when we’re back into regular sports,” Zimmerman said. “Student voice in the decision-making of adults is so important. The support from ADs, buy-in from the kids, and being at the same table having these conversations has been incredible.” 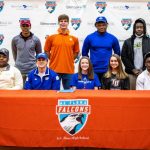